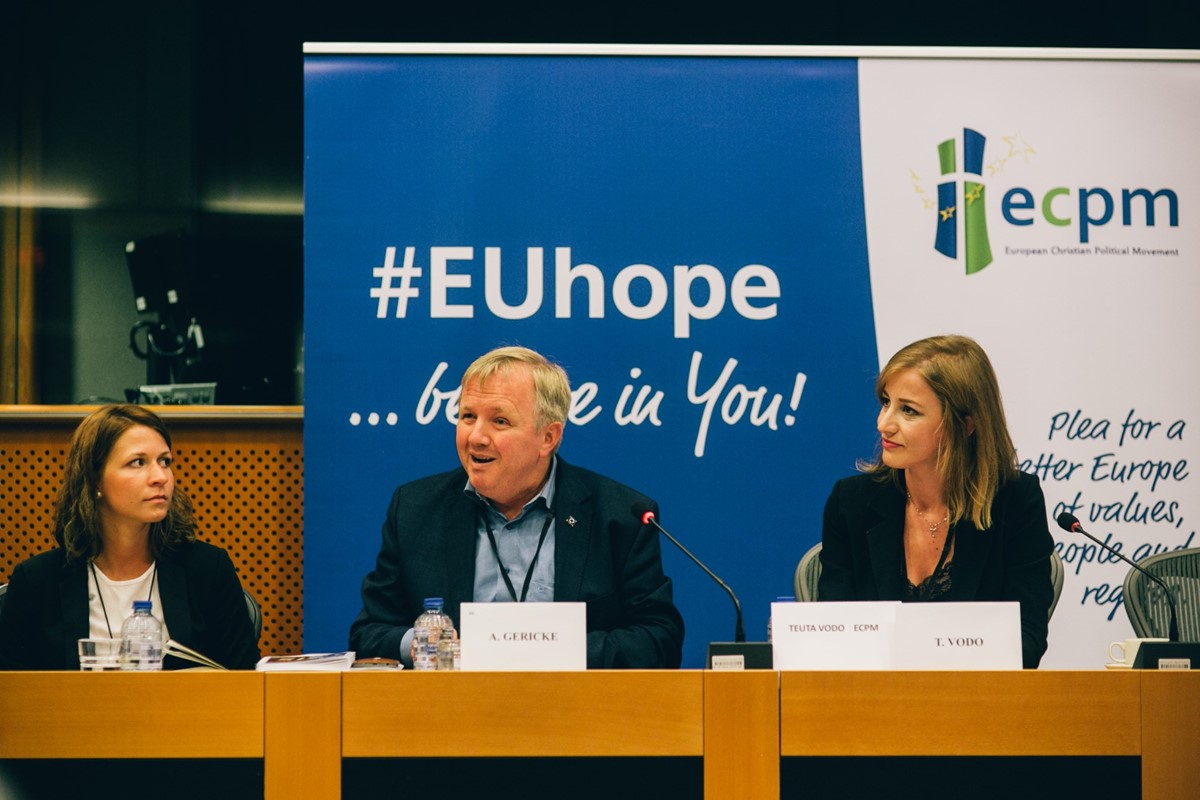 The issue of the refugee children who go missing was discussed in a high-level conference event on the 11th of July by ECPM and its MEP Arne Gericke (ECR) in the European Parliament.

The topic of unaccompanied refugee minors (URMs) in the European migrant crisis was analysed through several specters by policy officers, researchers and advocates such as Marta Walender, Elona Bokshi, Delphine Morales, Teuta Vodo, Torsten Gumbrecht and Maria Vilrino Dapena who analysed the legal, judicial, political and social aspects of the phenomenon. The agency of the European Commission, the European Asylum Support Office (EASO), represented by Ms. Dapena explained the long-term strategy on the support activities on asylum-seeking children and the various activities.

During his opening remarks, ECPM MEP Gericke stated that the phenomenon of the refugee children who go missing is of high concern as it is underreported.  As a result, many URMs are trafficked and end up being exploited and abused. Even though the European Union has established common legal safeguards for specific situations on URMs in terms of asylum and trafficking, legal and policy instruments to further protect them from exploitation are still needed.

The speakers underlined several inconsistencies in the reporting of the total number of unaccompanied refugee minors that are relocated. The main reason: some Member States only consider as such the children who are on their own and exclude from the reporting separated children that have been relocated.  Noting that currently in Germany there are about 10,000 children missing, Mr. Gericke called for better reception centers for the long-term adjustments of these children, for a better system which will identify the unaccompanied refugee children through the systems for information storage and sharing, and for enhanced coordination at European level in police operations aiming at combating the trafficking of children.

Teuta Vodo (ECPM European Policy Researcher) explained a legal analysis of the concepts “unaccompanied children” and “best interests of the child” as defined by the UN Committee on the Rights of the Child i.e., ‘those children who have been separated from both parents and other relatives and are not being cared for by an adult who, by law or custom, is responsible for doing so’ (Articles 1,22 Convention of the Rights of the Child(CRC). As she stated, the principle of the ‘best interests of the child’ (Article 3 CRC) is seen as a procedural requirement that decision makers examine, before decisions are taken which affect a child or a group of children. They try to find out whether the proposed solution is consistent with the best interests of the child or the children. She also made special reference to EU legal instruments currently in place that address the protection of URMs (e.g. EU Anti-Trafficking Directive and the EU returns Directive). However, the definition of “unaccompanied child” varies from country to country leading to differing levels of protection.

The current situation from the field was described by the next speakers, Marta Welander (Refugee Rights Data Project), Delphine Moralis (Missing Children Europe) and Torsten Gumbrecht (B-UMF) who, among other, gave recommendations and potential measures to be taken by each Member State.  In their analysis they included the poor reception conditions as well as the lack of information and stressed the need for better training for professionals in charge of coordination at national or cross-border level. The speakers pointed out various legal and practical obstacles to accessing asylum procedures encountered by unaccompanied refugee minors. The national legislation may hinder and delay the access to asylum procedures as the child protection services that are responsible for unaccompanied children often do not prioritize access to asylum and international protection. Other challenges, as pointed out, are related to age assessment procedures and legal guardianship. The crucial issue of age assessment of unaccompanied asylum-seeking children was accurately explained by Ms. Bokshi (European Council of Refugees). She supported the view that the current European practice reveals a persisting disregard of principles enshrined in Charter of Fundamental Rights of the EU such as the benefit of the doubt and the best interests of the child. Additionally, she explained several disparities at the national and regional level, where asylum authorities’ approach to age assessment contradict the principles elaborated by medical bodies and/or child welfare professionals.

A proposed Asylum Procedures Regulation that is currently under discussion offers a crucial opportunity to further clarify the fundamental principles applicable to age assessment of unaccompanied asylum-seeking children.

ECPM MEP Arne Gericke assessed the possibility that the child may be a victim of trafficking, labor or sexual exploitation and other crimes. He concluded that those missing children should concern everyone and that children should be treated first and foremost as children.