Fighting any form of modern slavery is one of ECPM's core values and we are glad to have been able to collaborate with various NGOs for this event which drew national media attention in Serbia. There were over 100 participants who attended the four panels on the first day and the workshops on the second one.

- Oliver Pejak Prokes - Judge of the Court of Appeal

Fighting any form of modern slavery is one of ECPM's core values and we are glad to have been able to collaborate with Sloboda Nema Cenu (Freedom Has No Price), Opens2019, Red Cross, ChristenUnie and others for this event which drew national media attention in Serbia. There were over 100 participants who attended the four panels on the first day and the workshops on the second one.

The speakers present were from the National Directorate for Combating Human Trafficking, a prosecutor and judge dealing with such cases, a safe house director, task force leaders from various cities, as well as survivors of human trafficking. Some of the realities from the ground were difficult to hear, the statistics surrounding this modern form of slavery are disheartening.

The survivors present who shared their stories, all brave and strong women, have highlighted the challenges they faced once they got out. Re-victimization (by members of the society, police officers taking their statements, prosecutors etc.) was mentioned to be a very difficult aspect to deal with. We were also reminded that the opportunity of a job and security and stability (financial as well as emotional) are essential and those who do not get that as soon as they get out of their captivity tend to relapse: "We need a working permit and a job. That gives us purpose and a plan for the future. That is part of the restoration"- said a survivor.

The first panel that followed was made up by professionals at the highest levels who come into contact with human trafficking directly. They spoke about policy consolidation, standard practices, better coordination among the task forces from various cities, the merits of new laws that came into effect which help their work and about some rules which hinder them. The conclusion was that although progress has been made, there is still a long way to go. Public funding for these departments was emphasized as being a problem, since the budget allocated usually runs out by the time the year is a little more than half up. They acknowledged the importance of the various NGOs active in Serbia who can stand in the gap and partner with them in helping the victims of human trafficking.

The speakers on the second panel connected the issue of modern slavery to the economical factors: lack of opportunity, poverty, underpaid jobs, inflation etc. It was also mentioned that human trafficking in Serbia is largely not part of organized crime, it is a local or internal affair, perpetrated by those we know and trust: a neighbor who offers a too-good-to-be-true job, a boyfriend who presses his girlfriend to have sex with other people in exchange for money, parents who neglect or abuse their children which causes them to run away etc. As such, prevention plays a significant role in combating human trafficking in Serbia. The Red Cross, for instance, is using cartoons depicting Pinocchio in various dangerous situations and how he manages to discern and stay safe. They show these cartoons in schools every year. 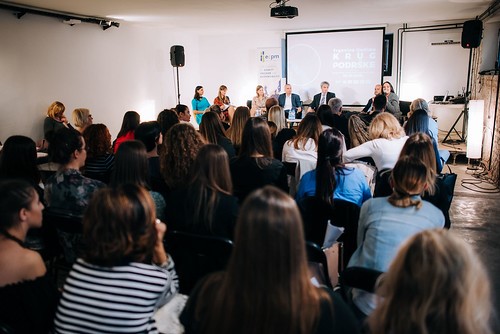