ECPM was delighted to join Forum+, Youcat Foundation, Comece, and members of European Parliament from ECR and EPP groups for this three-day conference at the European Parliament aimed at youth from Croatia, Czech Republic and Slovakia. Forum Plus organized this event around three particular Catholic social teachings: unity, solidarity and responsibility. The aim of the conference was to inform, to educate, to network, and to initiate thinking about how Christians can contribute to the development of Europe.

The event featured high-impact speakers who pointed to the relevance and timeliness of Jesus' teachings for today's society and inspired the young participants to be part of the efforts for implementing them.

All sessions are available on the Forum Plus YouTube channel.

Here are the summaries for each day:

The first day's theme was ‘Christian values in contemporary Europe’ and several speakers shared on different aspects of this topic. Father Manuel Enrique Barrios Prieto (COMECE) elaborated on the four dreams Pope Francis has for Europe: a Europe that is friend to each and all, a Europe as a family and community, a Europe that is inclusive and generous, and a Europe marked by healthy secularism. Father Jason Charron spoke about the importance of love and Jesus’ greatest commandment for the future of Europe and highlighted that tomorrow’s Europe depends on the Christians of today.

In the evening, a panel of seven MEPs from various political groups shared about their experiences as Christians in European politics. They all identified their Christian faith as being their motivation to engage in politics and how the teachings of Jesus continue to be relevant for today. MEP Ladislav Ilčić especially called upon young people: “European politics is like the beat-up man in the parable of the Good Samaritan. And it desperately needs you – young people in Europe – to be the good Samaritan, to care and make it your responsibility.” ECPM MEP Bert-Jan Ruissen emphasised the responsibility of young Christians to serve Europe: “Christians are called to serve – just like Jesus did. Governments and leaders are called to serve the people”.

On the second day the three concepts central to this year's conference were explored further. In the afternoon, several Christian NGOs and groups presented their work and various initiatives, inviting the youth in attendance to sign up and get involved.

During the evening session, the Secretary of the Pontifical Commission for Latin America- Prof. Rodrigo Guerra López- spoke about the way we think about Christian social doctrine. He pointed to the fact that by God becoming human in the person of Jesus, He is uniquely aware and joined with us in our experiences, whether joy or pain. And that all of us together form the Church, his Body, here on Earth. Being bound together in this way should prevent us from division, from prejudice or malice towards our neighbour. He quoted Pope Francis:

"Indeed, while solidarity is the principle of social planning that allows the unequal to become equal, fraternity is what allows the equal to be different people. Fraternity allows people who are equal in their essence, dignity, freedom and their fundamental rights to participate differently in the common good according to their abilities, their life plan, their vocation, their work or their charism of service. [...] our brothers and sisters are the prolongation of the Incarnation for each of us". (Pope Francis, message to Prof. Margaret Archer, 2017)

Professor Lopez continued: "A moralistic Christianity, focused on a defensive or merely combative attitude, does not exhibit what is specific- Christian. It is the love of God lived radically with the wounded brother, with the fallen brother, with the "adversary" brother, which can generate o novelty greater than that offered by the logic of power of the logic of ideology."

We highly encourage everyone to listen to Professor Lopez' entire presentation, found here.

On the third day, the conference concluded with a panel discussion on the immediate and practical implications of this Christian social teaching.

ECPM Director for Policy and European Affairs- Leo van Doesburg- shared a few thoughts on ways of promoting Christian values in a secular political world. In the Bible, we can find examples of good politicians, he explained. Human dignity is the starting point and the foundation of Christian politics. The secular, humanistic thinking sees human dignity as a right, whereas in Christian politics we have a responsibility towards it. This is why Christian politicians are so necessary in today's societies and why there is a place and an urgency for the young people in attendance to step up. To overcome obstacles, van Doesburg said it is important to listen, to ask questions, and to get to know your political counterparts. Christian politicians should be creative and brave to make coalitions and act. Finally, praying for wisdom to do the right thing is essential.

The panel of various NGO delegates spoke about the importance of fighting for peace within difficult regions and situations. About making your voice heard even when there is confrontation with oppression. A particular emphasis was placed on the importance of the family, as the place where you learn to love and serve each other, and how a healthy family is a blessing to society. A united, healthy family is a micro-society itself. Lastly, Father Mihovil Kurkut concluded the three-day event by reminding us that we are embedded in Jesus and that God does not seek perfection but chooses vulnerable people who will do everything with love for Him. 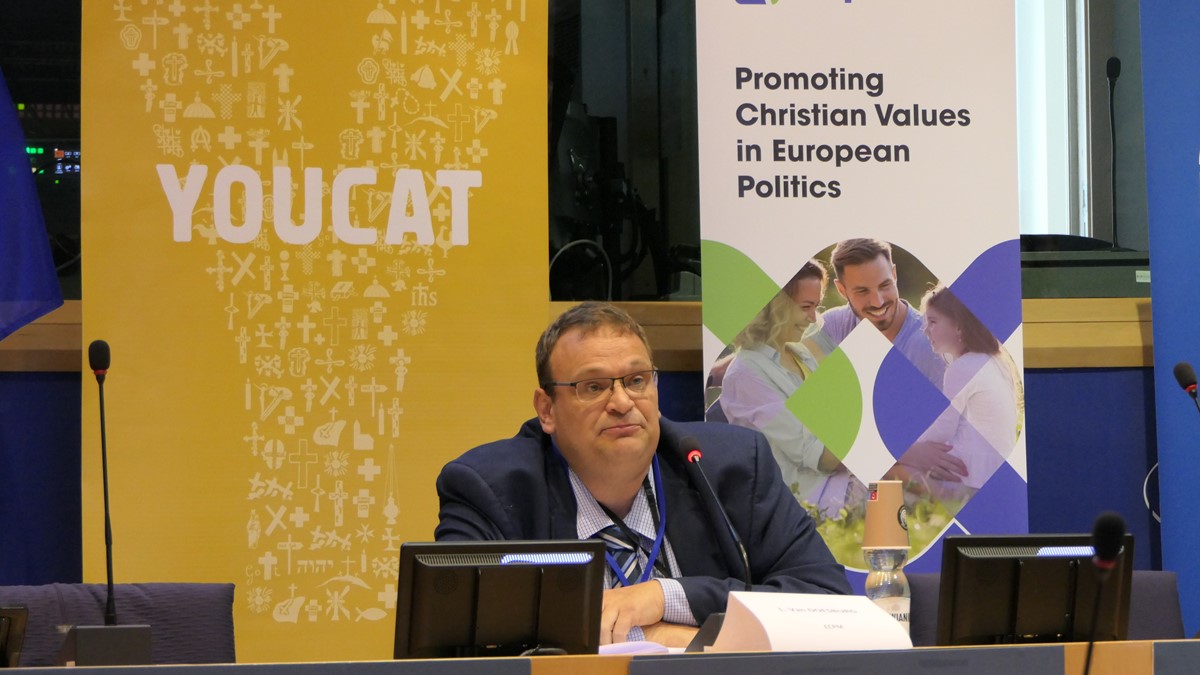