Because EFN is all about providing a bridge to freedom for those exploited by human trafficking &/or sexual exploitation. Individual ministries are planks in the bridge. Only by strengthening the collaboration between us, building each other up and looking at the big picture can the bridge be strong.

Bridge 2017 will give plenty of opportunities to pray, reflect, learn, network, strategise and be encouraged.

This year our theme is “With One Voice” as we learn how to become media savvy, work together to make our collective voice heard as well as helping survivors to speak out for themselves.

We look forward to seeing you there! 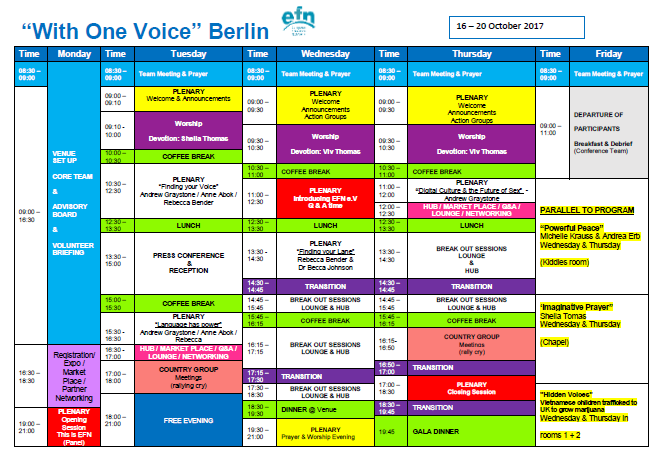 The European Freedom Network, formed by more than 200 partner organisations, becomes a legal entity. Experts, survivors, campaigners and other Christian workers shared resources and experitse at the 2017 “Bridge” conference.

About 200 women and men met in Berlin – one of the European cities with the highest number of prostituted women – from 16-19 October to discuss human trafficking and sexual slavery in Europe.

After a first meeting in 2011 (Stockholm) attended by ten people, this open platform to fight one of the main social issues the continent has grown to 206 organisations and 451 people (more than one hundred new partners only in 2017) from 42 countries. All of them share a desire for justice and a common Christian worldview.

This year’s gathering focused on “learning how to become media savvy, work together to make our collective voice heard as well as helping survivors to speak out for themselves”.

“WE KNOW THE STORIES”

In the “Bridge” opening night, Leanne Rhodes, member of the EFN core team, said the gathering is “not just a professional conference”, but a place in which people share not only their knowledge and expertise but also a common passion to serve trafficked and enslaved women. “We know the stories and we have cried tears and have had others crying tears on our shoulders”, she said.

The network is very much based on personal relationships and has “action groups” in areas such as education, health, voice, research, refugees, prayer, pornography, etc.

The purpose of this issue is to create contents and initiatives which, combined, help the EFN “speak into institutions like the European Union, the United Nations and the media with one voice”, Jennifer Roemhildt Tunehag, chair of the team, explained.

A Bible plenary and time of musical worship opened every day. Issues of identity, leadership and a simple lifestyle according to the examples of Jesus, Esther, Dorcas and Anna where presented by Sheila and Viv Thomas.

Throughout the week, workshops on topics like “360 degrees of exploitation”, “Trauma recovery and care key steps”, “Working with key players outside the Christian arena”, “Campaigning with an effective voice”.

An evaluation of the situation in every country was also on the schedule in two of the afternoons.

Organisations working in countries like Austria, Romania, Germany and the USA shared their resources in an exhibitor’s zone. Some of the projects they presented where textbooks for teenagers educating them to avoid the traps of human traffickers, special podcasts targeting prostituted women in several languages, prayer bracelets, and leather products made by trafficking survivors.

Meanwhile, several prayer initiatives were held during the conference, and an art exhibition denounced the trafficking of children to the UK to work in illegal cannabis plantations in closed buildings.

In a press conference (video below), local CDU parliamentarian and chair of the German group ‘Together against Human Trafficking’, Frank Heinrich, introduced four women who work in different contexts.

Jennifer Roemhildt Tunehag (Sweden) explained the aims of EFN and the significance of gatherings like “Bridge”. Karina Hristova (Bulgaria) gave details about how many girls fall into traps of human trafficking in Eastern European countries success in life too many times is closely tied to financial income.

Anne Abok (Nigeria) expanded on the causes that lead African women to be exploited in Europe and explained her work as a film-maker aiming to help understand the traps and realities of sexual slavery. Rebecca Bender (USA) explained her work as an activist campaigning against forced prostitution and training FBI and police officers based on her own experience as survivor of sex trafficking.

PORNOGRAPHY AND THE VULNERABILITY OF TEENAGERS

The speakers responded to questions. The rise of demand for prostitution in countries such as Spain, was linked to high consumption of pornography among young people, and the hyper-sexualised media contents, especially when it comes to advertising and the music industry. “We’re raising our children in cultures saturated in what we used to call soft pornography”, Bender said.

Speaking on the vulnerability of young people who fall into trafficking rings, it was said the connection “self-image and social media” had to be observed more closely. Teenagers are recruited for sexual exploitation through private messaging and the manipulation of the so-called ‘lover boys’ - young men who pretend to pursue a romantic relationship but later prove to be traffickers.

Asked about why the EFN brings together mostly Christians, Abok said the Christian message has much to offer in a context of oppression and slavery: “We believe human dignity is tied to freedom, and we believe freedom comes from being made in God’s image”. The speakers also emphasised the desire to work with other movements in the field who have other worldviews.

The ‘Nordic Model’ (started in Sweden) to of fighting sexual exploitation was also discussed. EFN partners support this strategy of punishing sex consumers. But laws reflect the culture, it was said, and legal changes in countries like Germany, were prostitution is accepted in many cases, start when society’s values are first shaped by research data and real stories that show the negative effects prostitution has on people and the society as a whole.

One of the key moments of the year to campaign against human trafficking is the European Union Anti-trafficking Day, on 18 October.

The EFN’s #DontShutYourEyes campaign was highlighted and this year’s video screened, while a social media action organised by the Christian movement reached more than 500,000 social media users.

Journalist Andrew Graystone (UK) expanded on the trends and risks of sexuality in a changing technological context with a plenary session on digital culture and the future of sex.

In another session, Dr Becca Johnson spoke on how to help victims of sexual exploitation recover and address trauma.

Six years after its inception, the European Freedom Network became a legal entity just before this year’s conference. It has been registered as a charity in Germany.

This is a step to help the movement to grow into “the next stage”. The union of more than 200 organisations from all European countries is also working on an online platform to share webinars, resources and facilitate contact among partners. 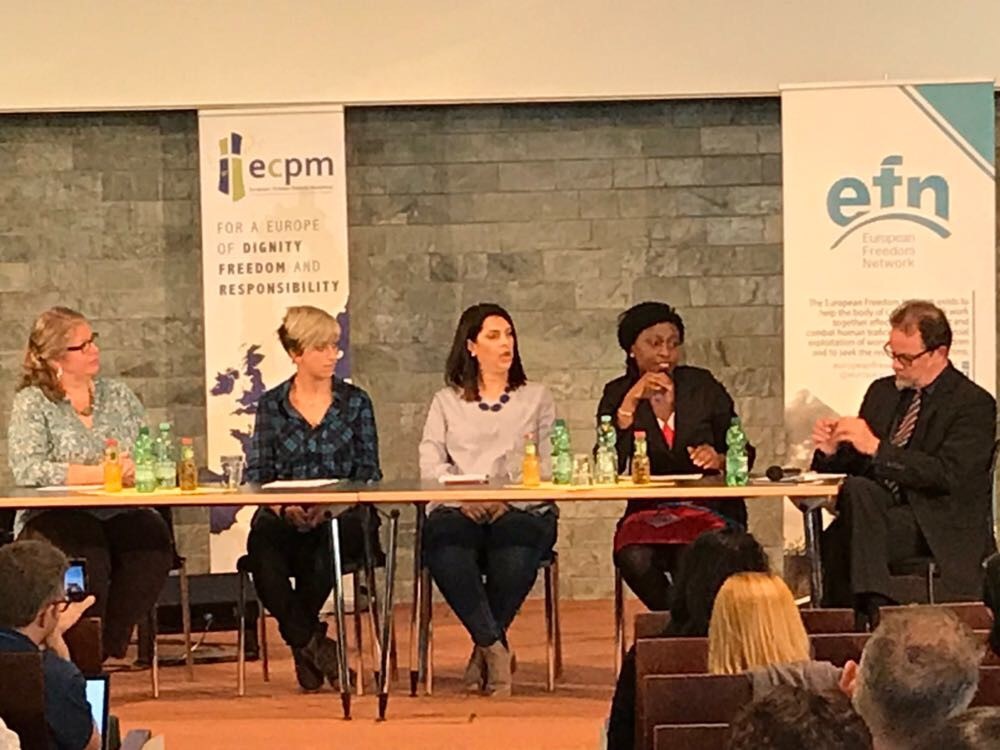 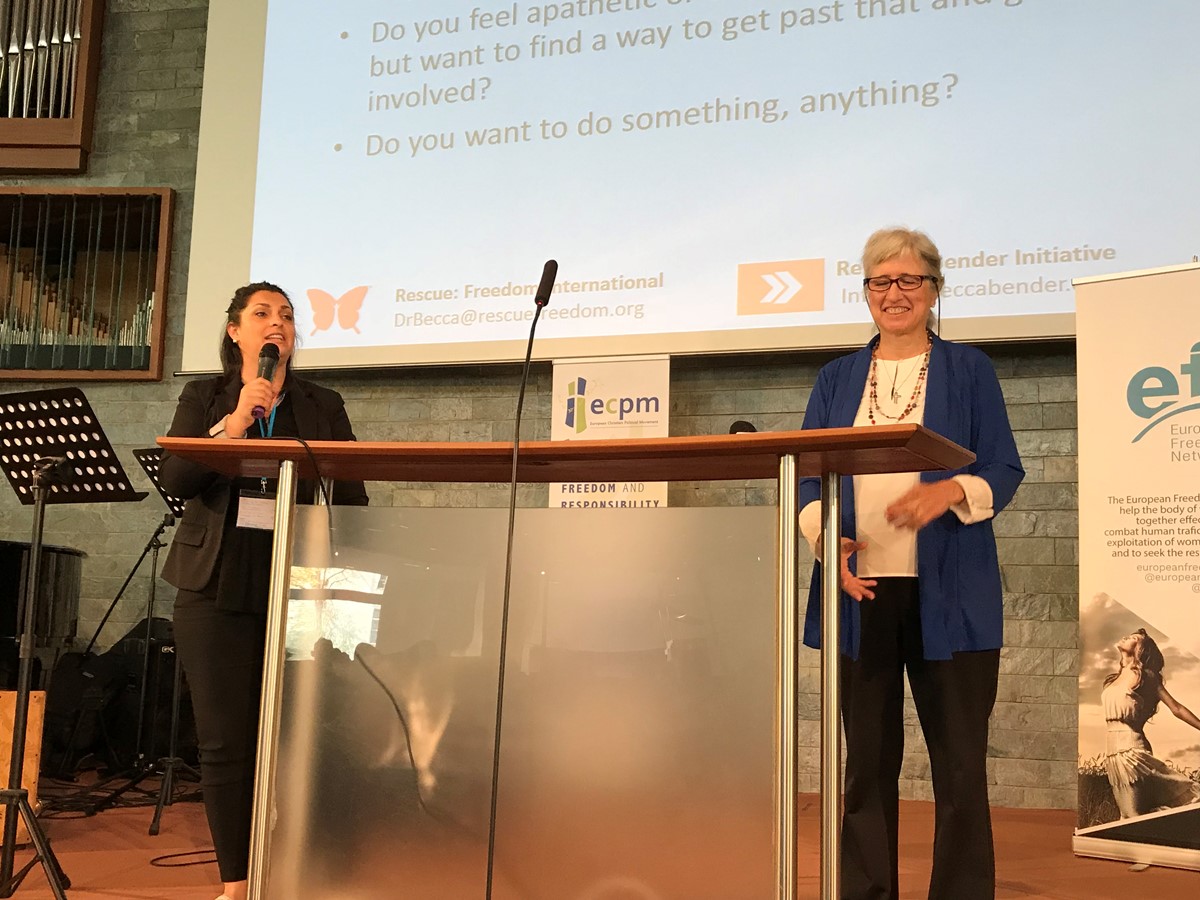 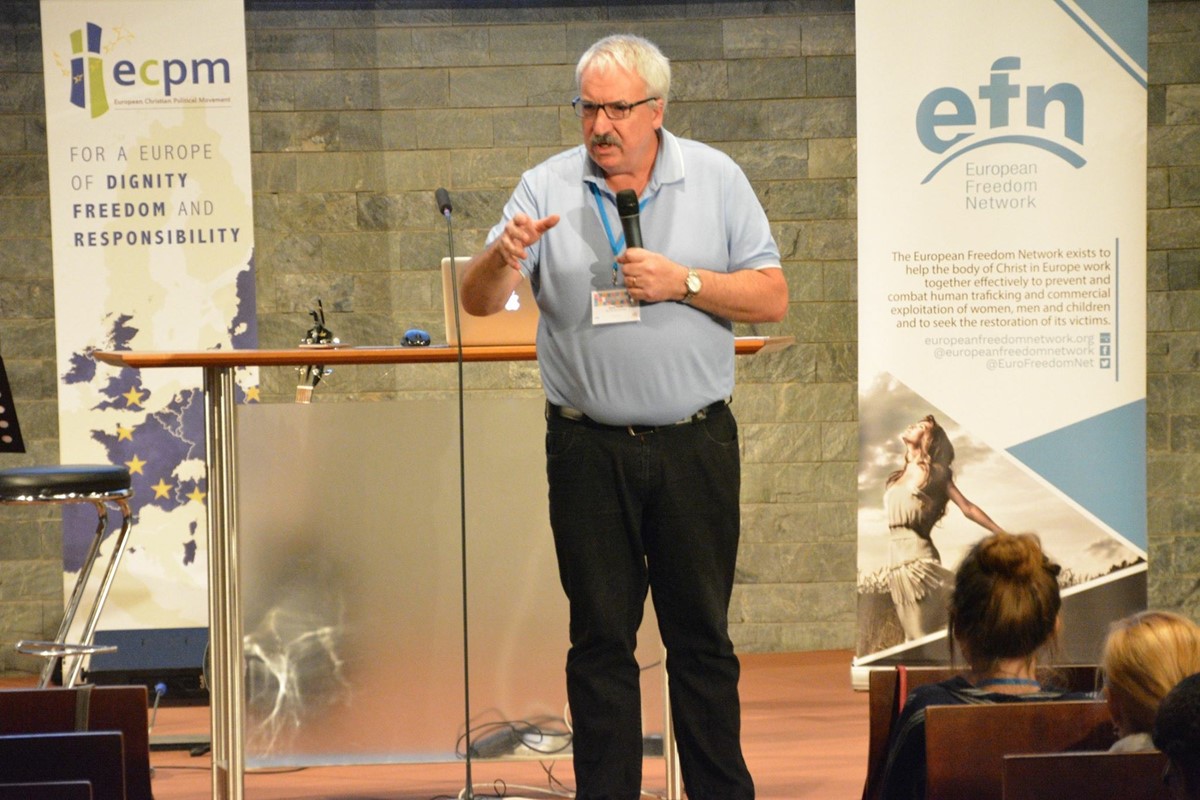